It’s been a long time since I wrote here. I guess I was waiting to see what the world was going to do and what would become the “new normal”
So those of you that are interested to know what’s been happening in the world of Porter are probably wondering why I didn’t put out an album this year given the fact that I’ve done so every 4 years since the first one.

It’s well known that the COVID lock downs killed most artists abilities to generate income from live performances. Unfortunately due to the sad popularity of streaming services (which pay artists fractions of penny’s) and very few people actually buying albums or music directly from the artist anymore made it simply impossible for me financially to record another album. On top of that… when I began my musical journey I always said I would record 3 albums and push them to the best of my ability and see what comes of it. Financially nothing came of it except a lot of debt. However, during that time I performed all over the world to crowds big and small. From open mics to booked tours and even festivals in front of hundreds of people. I was heard on the radio by thousands if not millions of people. Some of those shows I could see people singing along to songs of mine that they loved! Sometimes requests of my own songs were yelled out! The combination of those things is ultimately more success than I ever dreamed I would achieve when I first picked up that cheap guitar when I was down in Florida around 2005. While sitting up late practicing and writing songs.. I never really thought they would lead me to the places and people who would become part of my life’s journey. That people would tell me how a certain song effected them. Sometimes it inspired people and sometimes it made them cry. How my life on the road pursuing music would in itself inspire me to create even more music! I never thought any of those kinds of things would happen when I began learning guitar, harmonica and then writing my own songs… but they did happen and I’ll take that as a win!

I’ve focused the majority of my energy into music and sacrificed a lot of things most people take for granted in my pursuit. I don’t regret it at all and I followed through on my musical plan. I did everything and way more than I thought I would. Perhaps the RONA hit at the time I needed it to. To set me free from that dedication. Was it time to “grow up”? I can say I was ready to pursue some other interests that I’ve ignored for music. Some comforts too. Like a steady income and living indoors lol. I’ve been finding my new freedom enjoying motorcycles. I do a lot of riding now. I’ve moved back to Canada and relocated to the Okanagan area of British Columbia. It’s very nice here and I hope I can find a way to settle in and make it my home. Permanently?

None the less I plan to leave music alone for awhile. I love it too much to only have one foot in. It’s all or nothing for me I think. So for awhile it’ll have to be nothing. Maybe some open mics here and there. I love creating music too much to not come back to it after I perhaps stabilise my life. Ill surely put pen to paper, fingers to strings and lips to harmonica again. I know there are still a lot of songs inside me and things I need to say but they will have to remain unwritten and unsaid for now.

Thank you for your years of support! In years past, currently and in the years to come.

Keep listening to and sharing my music! 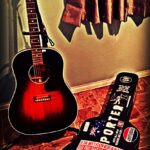