I’ve not wrote since the beginning of the tour which feels like a long time ago now. It’s been a hell of a ride! Seeing so many old friends again, some family too and even getting to play music with a bunch of them. Making new friends along the way as well. The shows I played were so much fun! I can’t thank those of you who came out to see me enough. To spend your money on my merch and help support this crazy life of music I am beyond grateful. Everyone who gave me a bed or couch to crash on or took me out an fed me while I was in your area..you are awesome! To the other musicians who opened for me and helped promote the shows, Bringing your friends out, meeting and performing with you was an honor. To all the venues who hosted me and helped promote the shows. Told their friends to come, supplied me with food, beer, shelter or whatever I thank you! Without you guys giving my music a place to be performed and heard then there is no tour. Your support for independent music is crucial to every musician and live music lover. So a giant thank you!

It felt good being back in Canada after 3yrs and going on that big road trip. I took routes that I’d never been on before which allowed me to see new areas which is getting hard for me cause I’ve kinda been everywhere at some point or another. I wish it could have been bigger and that I could have played more shows, maybe got to the island but I am grateful for everything I got and have. It felt really good being able to bring these new songs to everyone and hear so many positive things about them. Playing “stronger than oak” and “ride horses ride” to the family’s they were written for was a stressful yet very rewarding experience. All the support people shown me really helped me focus and become more confident on stage. Since it’s been several years since I’ve been up in front of people regularly it took a bit to really find my stride again. It makes me just want to keep going and yet this is also the first time I’ve had a home to come back to and it was nice to do that.
Now as far as the U.K. and Ireland tour goes. Well I’m pretty broke now so I’m going to have to work awhile and then see about putting it together. I have the Cornwall folk festival coming up and I was hoping to continue on from there with more shows but simply can’t afford it and music at this point does not cover itself in costs so I’ll have to restock the bank a bit and go from there. If you’re in the U.K. I recommend coming to see me at the festival of course! So keep an eye out for that tour announcement which will probably be sometime this winter/early next year.

So to wrap this up..one last thank you to anyone who crossed my path this summer. Those who helped me pursue this dream. Those who simple shared a laugh an a beer with me. I loved it all. It feels really good doing what you’re meant to be doing. I highly recommend it to anyone. 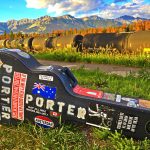