It’s a bit late but I wanted to wish you all a happy new year! The year is young and it’s the start of a new decade which is a great time to make some plans and goals. I honestly have no idea where I might be in 10yrs and if you’d asked me 10yrs ago where I thought I’d be right now…well I certainly wouldn’t have said I’d be living in a small Irish town with 3 albums under my belt and some amazing world wide adventures had. This time I’d like to think there will be a lot more travel and hopefully another album or 2. I’m starting to get a bit older now and really have to start making a solid plan for the future. I’m planning some big adventures this year and I hope to do some soul searching during them. Find some inner peace and get to know myself a little better. Decide what I want the next 10yrs to bring me.
On the musical end of that. In May it will be the 10yr anniversary of the release of “HIT THE ROAD” I think I might record a little EP with acoustic versions of songs from it and a few from the last 2. Maybe something new. However realistically it may not be released until next year but you never know. I might sit down and just pump them out one afternoon lol who knows?!
I want to thank you all for your continued support and love for independent music. I wish you an awesome 2020 and a fulfilling decade ahead. 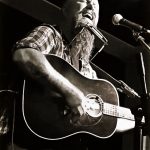